Experts believe a body discovered on a Cornwall coast path could be that of a 200-year-old sailor.

The remains of a human skeleton discovered on a footpath on the north Cornish coast may have belonged to a shipwrecked sailor from the 18th or 19th centuries.

A member of the public made the discovery at Trevone, near the popular tourist town of Padstow, overlooking Newtrain Bay.

Police and forensic experts responded to the scene and determined that the remains were historic, and the discovery was reported to Cornwall Council.

Experts now believe that the remains may have belonged to a shipwrecked sailor and could date back more than 200 years.

Ann Reynolds, from the council’s rural historic environment team, said: ‘The remains were located beside an area that is popular for memorial benches and floral tributes and were clearly visible within the coastal path.

‘It was important to act swiftly, first to determine that they were archaeological in nature and then to carefully remove the remains, showing dignity to the deceased and to avoid any distress to visitors to the spot.’

‘Initial investigation has shown that the remains were of an adult, cut off just above the knees, potentially by the construction of an adjacent hedge,’ Ms Reynolds added.

‘Given the location of the remains on the cliff and near the notoriously dangerous approach to Padstow Harbour, it is possible that they are of a shipwrecked sailor, and if so, potentially date to before 1808, after which the Grylls Act decreed that drowned remains washed ashore should be buried in consecrated ground.’

Councillor Martyn Alvey, portfolio holder for environment and climate change at Cornwall Council, said: ‘I’d like to thank everyone who has been involved in this excavation and shown such care while carrying out their work.

‘I hope that we can discover more about this individual before they are laid to rest once more.’

Prior to reburial, the remains will be subjected to additional analysis. 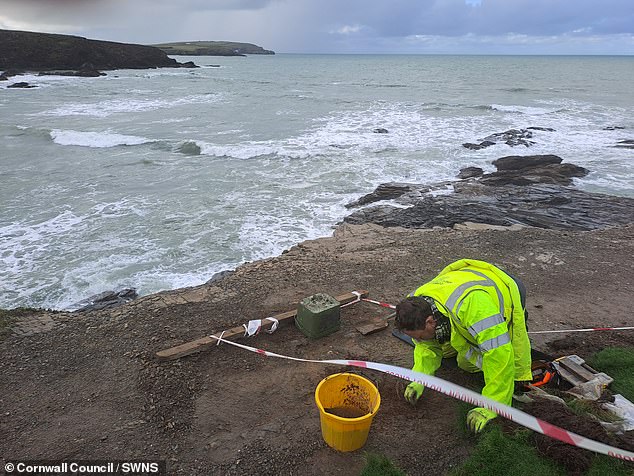 The Grylls Act, also known as the Burial of Drowned Persons Acts of 1808 and 1886, is a Parliamentary Act that mandates that all bodies washed up on shore from the sea be buried in consecrated ground.

Prior to the act, the deceased’s remains were unceremoniously buried on the nearest cliff to where they had come ashore.

Following the wreck of the frigate HMS Anson off the coast of Loe Bar in 1807, Cornish solicitor Thomas Grylls drafted the Bill.

More than 6,000 shipwrecks are thought to have occurred off the coast of Cornwall in the last 800 years.

The coast around the Lizard peninsula, nicknamed “The Graveyard of Ships,” is especially dangerous.