Gary Lucy was rushed to the hospital on Boxing Day after being involved in a car accident in which the entire front of his vehicle was smashed.

The Hollyoaks and Celebs Go Dating star was not seriously hurt, but she did leave the hospital with a sprained knee and crutches.

His new girlfriend, former Love Island contestant Laura Anderson, rushed to his aid and shared details about the incident with her 1.4 million Instagram followers.

Gary also admitted he was lucky to walk away from the smash, telling followers: ‘Someone was watching over me’

While the details of the accident remain unkown, the front of Gary’s Range Rover had come clean off in the crash while the windscreen was cracked, leaving the vehicle completely totalled.

Sharing a picture of his damaged car, the Hollyoaks star penned: ‘Someone was watching over me today’ before dubbing himself ‘Gary 9 lives’.

The accident occurred around 10 a.m., and the actor was in the hospital by 11 a.m. with an extremely swollen knee.

He was discharged later that evening with a brace over his knee and two crutches to help him walk.

Gary’s girlfriend Laura, whom he met on Celebs Go Dating, was there to look after him.

The former Love Island contestant posted a video of her boyfriend walking on crutches after being given morphine to help with his pain as they left the hospital. 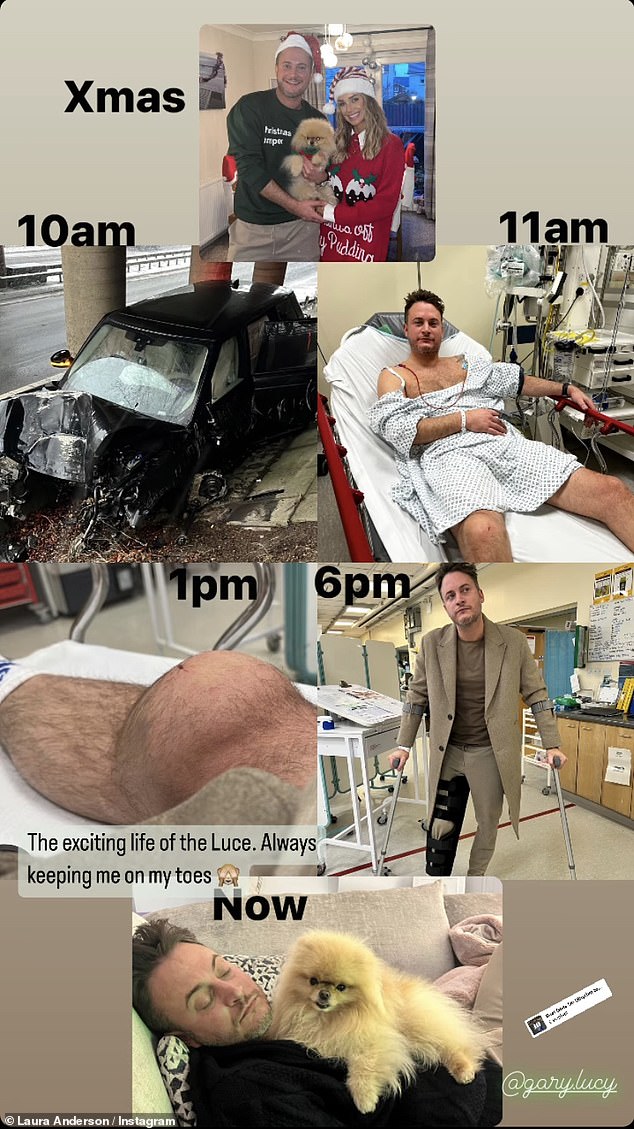 ‘Happy Boxing Day. We’ve had a lovely time, how are you feeling on your morphine?’ she questioned, before Gary replied: ‘Pretty f***ing good to be fair.’

A giggling Laura asked to see his knee, before apologetically planting a kiss on his cheek and saying: ‘It’s not funny sorry, love you.’

Gary ended the evening with some rest as he relaxed on the couch with Laura’s dog Buddy, enjoying some TV.

The beauty then shared a collage of snaps to document the timeline of the traumatic Boxing day, beginning with their happy Christmas day before going downhill to hospital, ending with Gary asleep on the couch.

‘The exciting life of the Luce. Always keeping me on my toes,’ wrote Laura while sharing the collage to her Stories.