A Massive crocodile ripped off a boy’s head before swallowing him, leaving the child’s distraught parents to discover their son’s body in the beast’s stomach.

Julio Otero Fernández, 8, was tragically mauled to death by the 12ft reptile in front of his horrified parents. 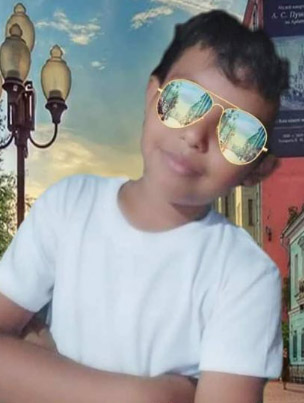 The heinous croc attack occurred while the youngster was on a fishing trip with his parents and four siblings in Limón, Costa Rica.

On October 30, the boy was playing knee-deep in the Matina River when he was attacked.

One of the boy’s relatives saw the large crocodile chomp the boy’s head off before dragging his remains underwater.

His parents, Don Julio Otero and Margini Fernández Flores, watched in horror as their son was dragged out of sight.

The victim’s father said: “The hardest thing for my wife was seeing the crocodile float away with my son’s body.”

An eyewitness said: “It shook him (the child) and ripped off his little head.

“Then it grabbed him again and dragged him under.”

On November 26, nearly a month later, a hunter tracked the suspected predator and shot it dead before fleeing the scene because it is illegal in Costa Rica to kill crocodiles.

Local residents discovered the crocodile’s body and cut it open after the mysterious hunter killed it.

They discovered human hair and bones in its stomach, which were thought to belong to little Julio.

The victim’s mother confirmed the discovery of hair and two bones inside the animal.

She said: “The crocodile was killed, I don’t know who did it, but they killed it and they found part of my child’s body.

“They found little hairs and bones. The animal is dead, for me it is a great relief that they have killed it.

“I wish they would kill them all so no family ever has to go through pain like this again.”

Julio’s parents moved to Costa Rica’s Caribbean coast from Nicaragua four years ago to work on a banana plantation.

The couple vowed to return to Nicaragua to ensure that their other four children, aged 16 to three, are safe from crocodiles and protected in neighboring Costa Rica.

“It is impossible to continue living in Matina because we find something that reminds us of Julito in every corner of the house,” the boy’s mother said. That is excruciatingly painful for us.

“I will not stay here because they protect these animals, and they have the ability to flee the river and attack more people.” The truth is that it’s frightening to think that something like this will happen again.”

The human remains have been passed on to the local authorities to carry out DNA tests.

The results have yet to be announced as the investigation continues.