The wife of a Colorado man who died after being thrown to the ground, placed in a chokehold, and restrained in an incident that a witness described as “George Floyd” has accused officials of lying and covering up the horrific event that was captured on video.

But when he arrived, Jones refused treatment and checked himself out of the emergency room against medical advice, the Denver Post reported.

Jones, without a ride home, chose to wait in the hospital lobby, according to a wrongful death lawsuit filed Wednesday by his widow Dedra Jones. 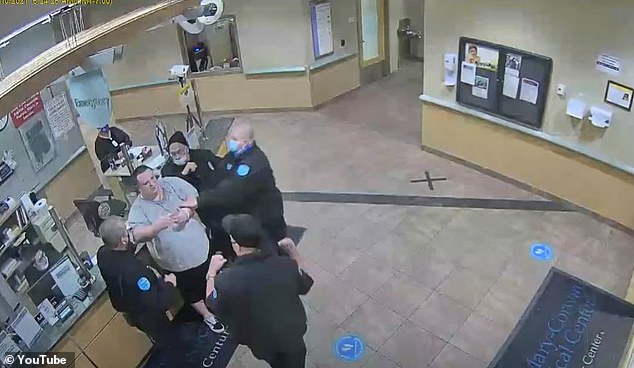 An admissions representative from the hospital told police at the time that Jones had been complaining about someone giving him’something’ and that he was afraid ‘[staff] were trying to kill him.’

Jones, who appeared agitated and sweaty, was then asked to leave the lobby, but refused and allegedly proceeded to ‘rip a phone out of the wall,’ according to a police investigation. 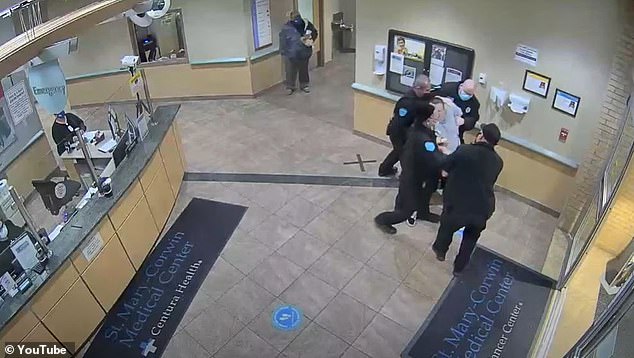 Surveillance footage from the hotel lobby revealed a different story, with four hospital security officers tackling Jones to the ground, sitting on top of him, and putting him in a chokehold.

Jones, 36, is seen being pushed onto his stomach after an aggressive scuffle with security guards.

A life support machine is wheeled into the lobby to assist a now-passed-out Jones before a rolling bed is brought in to move him.

Despite the protests of one nurse, who later told police she heard Jones say he ‘couldn’t breathe,’ the guards continued to restrain him.

According to the police investigation, she told officers that she tried to stop the security guards by warning them that their actions looked ‘a lot like the George Floyd incident, and we all know how that turned out.’

The nurse then added that one of the security guards responded that they knew what they were doing, according to a detective’s affidavit.

After Jones passed out, medical personnel performed CPR and re-admitted him to the emergency department, but Jones went into a coma and never regained consciousness. He died eight days later on February 18, 2021.

Jones’ death was ruled a homicide by El Paso County Coroner Leon Kelly, who determined that he died from anoxic brain injury, which occurs when the brain is deprived of oxygen due to physical restraint.

According to the autopsy report, the coroner also determined that other factors contributed to his death, including morbid obesity, methamphetamine and probable cocaine intoxication, and an enlarged heart.

Pueblo County District Attorney Jeff Chostner dropped the charges in August after a new, unnamed witness said that there were ‘nuances in the pathologist report’ and Chostner felt there was not enough evidence to secure a conviction, The Pueblo Chieftain reported at the time.

The dismissed criminal case against the four men appears to have since been sealed and court records are no longer publicly available.

‘We are going to use the civil justice system to get the justice back that Mathew’s family was denied through the criminal justice system,’ Nick Rowley, an attorney for Dedra Jones, told the Denver Post.

A spokeswoman for Centura Health, Lindsay Radford, said in an email to the publication that the hospital had not received a copy of the lawsuit.

She offered condolences to Jones’ family and said she could not comment further because of both patient privacy laws and the pending litigation.

The lawsuit alleges, that hospital staff lied to Dedra Jones about what happened to her husband, withheld evidence from Pueblo police and attempted to tamper with witnesses.

‘I truly believe this was a big cover-up,’ Dedra Jones said.

When she arrived at the hospital on February 10, 2021, Dedra claims she was escorted to a ‘quiet room’ where a hospital employee told her that her husband had been in the lobby ‘by himself’ when he had a heart attack and fell hard on the ground.

‘[The hospital employee said], ‘He got really agitated and he coded, and he hit the ground hard,” Dedra recalled.

Dedra Jones claims that she didn’t find out until six days later, when she called Pueblo police to look for her husband’s belongings, that he’d been in an altercation with the four security guards.

The nurse who tried to stop the security guards, Betty Webber, told police she was put on a disciplinary plan at work after the incident, and that the hospital accused her of lying about it and violating its policies, according to a 33-page affidavit Pueblo police filed against the security guards.

Webber also told police that an attorney for the hospital told her she should not speak to detectives without first going through him, because doing so could violate federal privacy laws.

‘She said Centura told everyone not to talk about the incident,’ the affidavit reads.

Police said that they had noticed a printed-out email taped to a wall in the hospital which urged all security staff to tell management if police inquired about the incident.

The hospital also refused to provide some records, for up to 8 months, about the incident despite being served a search warrant.

At the time, the hospital issued a statement to KRDO which said they could not comment on the matter and that they had been ‘cooperating’ with authorities.

‘Protecting patient and associate privacy is a value deeply rooted in our organization and as such, and due to privacy laws, we are not able to comment further on the circumstances surrounding this event,’ the statement read.

‘We have, and will continue to, cooperate with local authorities in this matter.’

While only 6:35 minutes of surveillance footage have been released so far, Rowley claims that the entire 34-minute video shows Jones was not aggressive or threatening before being tackled.

Jones does not appear to physically attack officers at any point in the choppy video, despite the fact that he is out of frame for several minutes.

Witness accounts of Jones pulling a phone out of a wall are also not shown in the video, and it was unclear whether Jones spitting on security guards was true.

Before the aggressive struggle with the guards, the full video shows Jones sweating, walking around, conversing with the security guards, and leaning on a counter inside the lobby.

‘They lied and they covered this up. And the video completely contradicts everything that they said, everything.’

Dedra said she hopes the lawsuit brings ‘some type of justice’ for her husband’s death.

‘Somebody needs to be held accountable,’ she said.

An obituary set up by Jones family at the time said the 36-year-old was born January 15, 1985, and that he was survived by Dedra and their daughter Tea Montoya.

Who is Dawn Coleman? Woman charged with aiding murder of Cairo...