This is the moment an angry beanie-hat-wearing reveller is knocked out after being smacked across the face with a pool cue.

Footage shows the man lunging across the table and wildly swinging at people before a punter turns his cue into a weapon and delivers a brutal full-force blow to his face.

He falls to the ground motionless as a crowd of revelers piles in with cues and glasses. It is unclear what caused the chaos. According to police, no arrests have been made as of yet.

‘It was threatening to kick off all night,’ one partygoer told MailOnline. There was a load of them by the pool table. Then a big row broke out and the lad with the hat was going at them all.

‘He grabbed a ball from the table and threw it at one of the people sitting at the table, then went for another lad across the table.

‘I don’t think he noticed someone standing next to him because he was completely caught off guard. This kid took a swipe at his head and knocked him out cold.

‘After that, it just kept going off. There were a few digs thrown, and I believe he took another blow to the head while on the floor. People were leaving in fear of being hit. The lads then simply legged it. But it’s all on video.’ 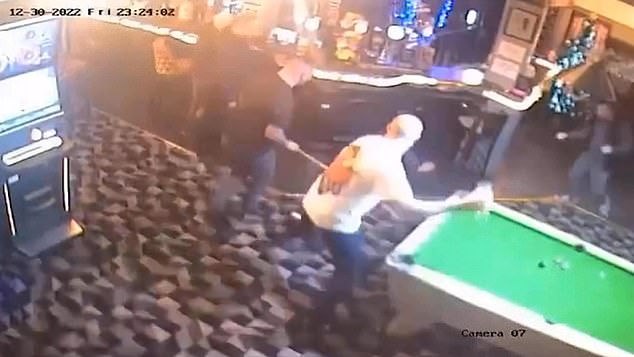 ‘On the evening of December 30 2022, we were alerted to an altercation taking place within a pub on Prince Edward Road, South Shields,’ said a spokesperson for Northumrbia Police.

‘An officer responded to the scene, but those involved had already left, and no reports of injuries were made to police,’ said the officer. Officers are reviewing CCTV footage from the incident, and investigations are ongoing.’

Who is Louise Owen? Mum’s shock after being charged 20p by...