“We share your pain,” Putin told the women gathered at the Kremlin on Friday ahead of Mother’s Day in Russia on Sunday. “Nothing can ever make up for the loss of a son.” According to the BBC, several of the mothers are members of pro-Kremlin movements, prompting critics to charge that they were carefully chosen for the meeting while those who have spoken out against the war were excluded.

Putin told the women that what they hear on the internet and on television cannot always be trusted.

“Life is more difficult and diverse that what is shown on TV screens or even on the Internet,” Putin said. “There are many fakes, cheating, lies there.”

The strongman also provided strange solace, telling one mother that her son “achieved his goal” and “didn’t die in vain,” omitting any mention of Russia’s battlefield defeats. He also made comparisons between the deaths and those caused by car accidents and alcoholism. “In our country, approximately 30,000 people are killed in traffic accidents” (per year). “Around the same number die as a result of alcohol,” Russia’s president stated. “We are all mortal, and we will all leave this world one day.” It is unavoidable.”

The chairman of the US Joint Chiefs of Staff, Gen. Mark Milley, estimated earlier this month that more than 100,000 Russian soldiers and 100,000 Ukrainian soldiers had been wounded or killed in the war.

Milley’s estimates contrast sharply with Russia’s most recent death toll update, which came in September and stated that only 5,937 troops had been killed since the beginning of the war. 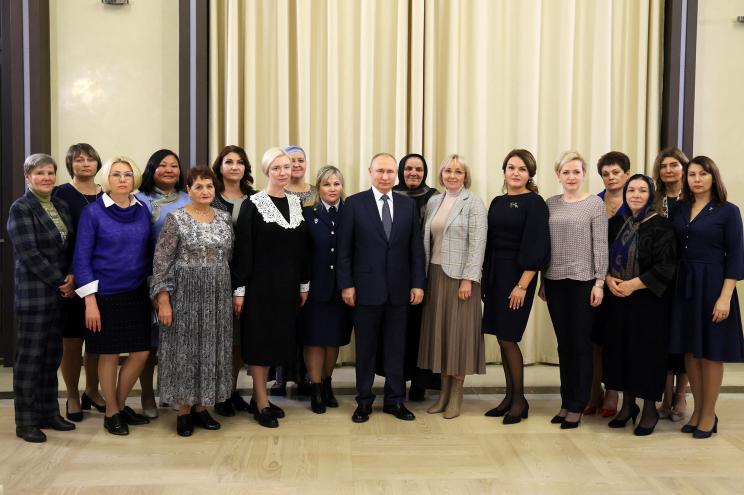 The meeting made it clear that Putin is concerned about domestic reactions to the war. Critics were quick to point out that his chosen audience did not include any of the activist military spouses and mothers who had demanded an audience with him.

According to The Guardian, among those invited were poet and director Olesya Shigina, known for producing patriotic films, and Nadezhda Uzunova, an activist with the veterans’ NGO the Fighting Brotherhood, which is led by ex-governor of Moscow and former general Boris Gromov.

A third woman was identified as Zharadat Aguyeva, who has two sons fighting in Ukraine and whose family reportedly has close ties to Chechen leadership.