A second grand jury in Pima County, Arizona, has decided not to recommend manslaughter charges against a former Tucson cop who shot a wheelchair-bound suspect nine times in a mall parking lot, killing him.

Off duty, Ryan Remington, 32, shot Richard Lee Richards, 61, in the parking lot of a city mall. On November 30, 2021, Richards drew a knife on a Walmart employee as he was leaving the store with a stolen tool box.

Richards was on his way to a Lowe’s across the parking lot when Remington, who was working security for Walmart at the time, told him to drop the knife and not enter another store.

Before Remington opened fire, the suspect ignored the officer, causing Richards to fall out of his scooter and die.

On Wednesday, the Pima County Superior Court jury voted unanimously against charging Remington. Regardless of the grand jury’s decision, the state may still file charges.

State prosecutors, according to defense attorneys, made misleading statements to the first grand jury. Judge Danelle Liwski of Pima County Superior Court agreed, but believed they did not do it on purpose.

Last month, Liwski granted the defense request to remand the case to a grand jury.

In a statement, Pima County Attorney Laura Conover said ‘victim notification is our focus and top priority at this time, as the matter continues under our review.’

Remington was fired in January 2022 for what police determined was excessive use of force.

A civil rights lawsuit filed by Richards’ family against Remington and the City of Tucson remains tied up in federal court.

During the theft, Richards allegedly flashed a knife at the store employee who asked for a receipt for the product.

‘He’s got a knife in his other hand,’ someone can be heard on the bodycam video as Richards wheels up to the entrance of the big box store.

Seconds later Remington can be seen unloading his weapon on the shoplifter.

Richards has been confined to a wheelchair since getting hip surgery while in prison. His sister Victoria Richards told KGUN. She said that her brother had battled drug addiction and been in prison most of his life.

While serving a sentence, he volunteered to help fight forest fires and fell off a cliff, hitting his head.

‘He emerged with severe brain damage. He moved in with me, and I taught him how to drive and count money. Everything returned fairly quickly, but it was like having a child all over again,’ she told a TV news channel in 2021.

She and her brother had an argument a few years before the shooting, and she dropped him off at a Salvation Army center.

In August, Rick Resch, a lawyer for Richards’ family, stated that they were relieved that the officer would finally stand trial.

‘It has been a long and difficult past nine months for Mr. Richards’s family, but they are relieved that former Officer Ryan Remington has been indicted and will face the prospect of justice for the shooting and killing of Mr. Richards,’ Resch said in a statement.

In Arizona, manslaughter, a class two felony that carries a minimum seven years in prison, is defined as ‘recklessly causing the death of another person.’

Remington did not testify before the grand jury to present any self-defense arguments.

‘Manslaughter doesn’t even fit,’ Remington’s lawyer Mike Storie told KVOA. ‘I don’t want to get into legal arguments but it’s a legal fiction. So I’ll be very interested to read the grand jury transcript and find out what went on in that room when I was not present.’ 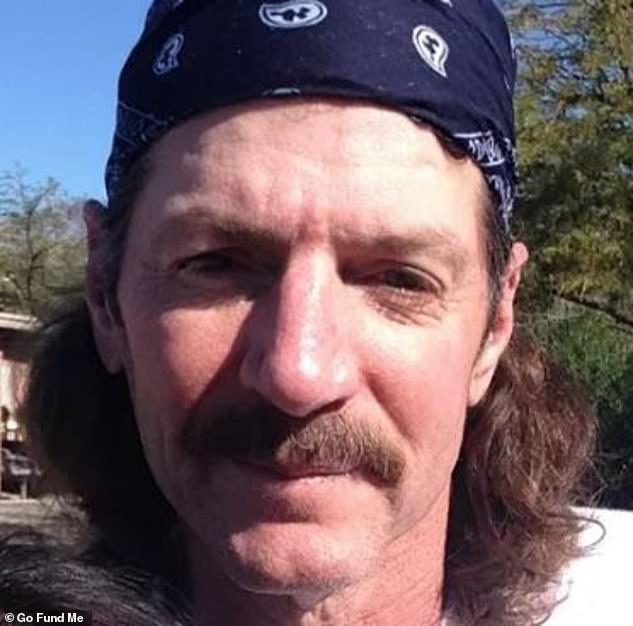 Storie has said in the past that his client ‘had no non-lethal options.’

‘He did have a taser, but he didn’t feel he had the proper spread to deploy it, with the wheelchair between him and Richards,’ the lawyer explained.

‘Now that the Grand Jury has issued an indictment and Ryan Remington will face criminal charges, it is up to the courts to decide,’ she wrote on Twitter.

Remington, a four-year veteran of the department, was fired after an internal investigation following the shooting, according to then-police Chief Chris Magnus.

The chief was ‘deeply disturbed and troubled’ by the ex-response. cop’s ‘His use of deadly force in this incident is a clear violation of department policy and directly contradicts multiple aspects of our use of force and training,’ Magnus said.