A policewoman who was convicted of common assault for assaulting a pub doorman today faces dismissal from the force.

Police Constable Karen Canwell, 37, will now face a misconduct investigation by Northamptonshire Police after the Detective Chief Inspector said her performance was ‘way below’ expectations.

Magistrates at Loughborough Magistrates’ Court today also ordered her to pay a £1,609 fine. 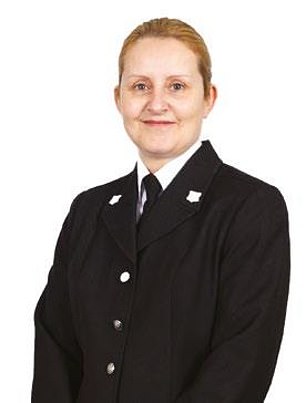 Canwell was off-duty and at the King Edward VII pub in Rushden, Northamptonshire, when a fight broke out on December 11, last year.

The court heard that the serving police officer assaulted the pub doorman twice before being apprehended by colleagues who were called to the scene.

The incident happened in the evening, following a disturbance at the King Edward VII pub on Queen Street.

Northamptonshire Police said: ‘The disturbance moved out onto the street with PC Canwell, off-duty at the time, assaulting a member of door staff by striking him to the chest on two occasions.’

Canwell was then arrested and interviewed the next day, before being released on bail pending her first court appearance.

‘Her conduct has fallen way below what we would expect of any police officer in this Force.

‘PC Canwell was placed onto restricted duties whilst the investigation took place. A misconduct investigation will now take place led by our Professional Standards Department.’